The BIG UP Fifth edition will be held the next 5, 6 and 7 October. 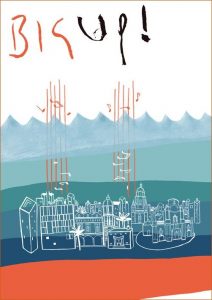 The BIG UP is a national meeting of musical influencers will bring to Murcia the most important figures of musical communication of the country. This musical event will present emerging projects of the Region with concerts in the streets and squares of Murcia.

The Councilor for Employment, Tourism and Culture, Jesús Pacheco, together with the Councilor for Youth and Cooperation, Rebeca Pérez, presented this morning the new edition of the Big Up to be held on 5, 6 and 7 October.

This fifth edition is organized by the City of Murcia, with the coordination of the Institute of Artistic Expression of the Southeast, IEAS, and aims to be a musical showcase for the national industry and specialized media.

Selected Bands
The bands that have been selected for having more score, and that will go out on October 7 to present their special showcases with sound limited to ambient sound and with their own production and scenery are:

And as substitute will be the group Naponia.

This year Big Up Murcia has a live program in different rooms REM, Musik and Garage Beat Club

For more information, please read the complete announcement of the Consejelia de Cultura where these few lines have been extracted

Feasts of Carthaginians and Romans – Cartagena 2017 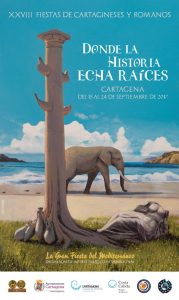 The feasts of Carthaginians and Romans – Cartagena 2017 (Region de Murcia), from the first Friday after September 15 and lasts ten days.

The meaning of this celebration is to highlight the events of the Second Punic War 2,200 years ago, taking into account the history and archeology of Cartagena.

A landing commemorates the storming of the city in 209 BC. AD by the Roman troops of Scipio. This results in a festive week, days are reserved for two beligérants alternately: Romans and Cartagenois.
We will attend the wedding of Hannibal and Imilce. We will have the games of the Roman circus with gladiators and wild beasts. Everyone ends up in the big parade on Saturday, the great day of the feast, when all the troops and legions march on the city.

The wedding of Hannial and Himilce or the day of the Roman Circus, with its gladiators and wild animals, lead into the great parade on Saturday 23rd, the big day of the fiesta, when all the troops and legions march through the city.

September Feasts Murcia starts with the Pilgrimage to Murcia and official reception to Our Lady of the Fuensanta: 31 of august/Romería hacia Murcia y recepción oficial a Ntra. Sra. de la Fuensanta: 31 de Agosto.

The September Fair of Murcia is a festival of market popular character that sinks its roots in medieval fairs.
Already lost the need and the tradition of the fairs to exchange products and merchandise, there are still traces of what would be its origin, cattle fair and craft stalls. At the September Fair in Murcia, various festivities coincide:

Is a great showcase of the region’s gastronomy and wine, not to mention, of course, the fair with its attractions that delight the children and teenagers and the bullfighting fair during this month.
These festivities begin with the descent of the Virgin of Fuensanta from its sanctuary to the Cathedral in Murcia and these parties are closed with the pilgrimage of La Fuensanta back to the sanctuary. 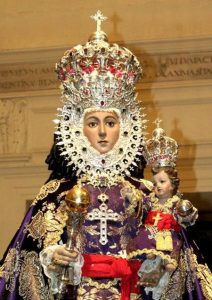 Pilgrimage of Our Lady of Fuensanta is the beginning of the feasts of September in Murcia.

The most traditional fiesta in Murcia is the September Fair, because its celebration goes back to the privilege of Alfonso X in 1266.
In its origin the fair was strictly commercial, but little by little it was incorporating fun and festive activities. And in the last years, the party has surpassed the fair: is the moment in which the September Fair in Murcia lasts through its taurine celebrations, attractions, concerts, the Huertos del Malecón – with their tents for the tasting of the typical products of the orchard and the Wine and Food Show , feast of Moors and Christians, etc.
Date: 31/08/2017  – Where: Sanctuario del Monte at 15:30 – End at Cathedral of Murcia 31/08/2017 at 20:30

Huertos del Malecón: Gastronomía y música – 31/08/2017 to 11/09/2017
The Malecón Gardens host a total of 15 “Huertos” run by as many peñas huertanas that, once again, offer the typical gastronomy of Murcia in an atmosphere of reunion after the holiday period. In this environment so characteristic of the Fair of Murcia we can also talk about outdoor concerts, with free access (below are related day, time and artist). The Huerto del Malecón is a must to visit if you want to feel the essence of the September Fair.

Moros y Cristianos
The festival of Moors and Christians of the city of Murcia was born as such in 1983, but its gestation occurred in 1981 on the occasion of the commemorative events of the Foundation of Murcia, an event happened on April 21, 831 and was Celebrated thanks to the efforts of the Murcia section of the Association of Friends of the Castles in collaboration with the Defense of the Heritage of the Region of Murcia. They managed to interest various government agencies to get a dignified holiday – the city’s birthday – which was certainly achieved.

Last concert OSRM (Orchester Symphonique of the Region of Murcia) for this season 2016/2017 finishing end of June.

Under the leadership of  VIRGINIA MARTÍNEZ, the OSRM will play bandas sonoras: 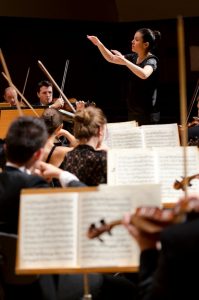 Do not miss the opportunity to listen, see and appreciate this orchestra that will not fail to surprise you for its quality.

PRE-CONCERT TALKS At 19:45 in audotorium El BATEL: A talk will be held prior to each concert in which the director, as well as several musicians will comment on details of the works to be performed, curiosities of his conception and composition, anecdotes of the essays, etc. To access it, simply show your entry or credit at the access door. 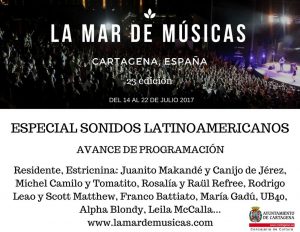 Starting 14th of July, it’s the XXIII Edition of the Festival “MAR de MÚSICAS” until the 23rd of July. 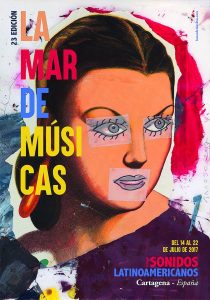 One more year we will have the opportunity to participate in an extraordinary moment of music, thanks to numerous sponsors and collaborators, lovers of these Latin sounds.

Lot of well known groups and artists, spread all around places of Cartagena, will give us to discover or remember musics from elsewhere.
A great opportunity to enjoy these Latin American sounds in known places of Cartagena but not necessarily well located in the city. Join the music with the discovery of this town.

The program is vast and diverse. We will have artists from diverse backgrounds but with a common love for Latin American music.

The concert JULIAN MARLEY & UPRISING ( Jamaica), son of the legendary Bob Marley reggae, will open the festival in the AUDITORIUM PARK TORRES to 23h Friday, July 15 at 23:00.

Another well known artist, the swedish Anna Ternheim, which is a veritable institution (5 Grammis of the Academy of Music in Sweden), which will offer a unique concert in Spain Saturday, 16 July at 21:30 at Parque de la Artilleria.

And much more, the best is Just have a look clicking on: Program. 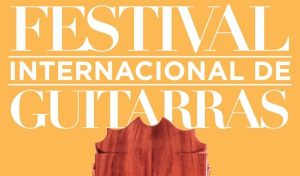 The “Festival International de Guitarras” will host performances by Philippe Villa, Fabio Montomoli and students of the Pulsed String Department of the Superior Music Conservatory.

Free access
The Almudí Palace will host next week a new edition of the International Festival of Guitars. All performances are free access and will be held from 20 hours.

Tuesday, June 13, the students of the Department of “Cuerda Pulsada” of the Superior Conservatory of Music of Murcia will offer a recital.

Wednesday, June 14, Philippe Villa will perform a classical and romantic guitar concert performing works by Johann Sebastian Bach, Giulio Regondi, Mauro Giuliani, Milan Tesar, Francisco Tarrega, Sergei Rudniev and José Luis Merlín.
Considered one of the most brilliant French guitarists of his generation. He is a specialist in the Romantic repertoire and plays both historical and modern instruments. It is based on new experiences such as combining the guitar with traditional instruments, improvisations or chamber music.

Thursday, June 15, with the performance of the Italian Fabio Montomoli who will perform with his classical guitar pieces by Mauro Giuliani, Fabio Montomoli and Francesco Iannitti.
Recognized by critics as a great interpreter of the international scene. Its sound is considered among the most beautiful, endowed with power, penetration and a vast timbre variety …

“With this festival we seek to give prominence and serve as a platform for the dissemination of this instrument, in a land of figures such as Santiago De Murcia or Narciso Yepes.The program combines the new talents of the Conservatory with renowned figures from the international scene” .

The Almudí Palace is a historical building located in the city of Murcia ( Region of Murcia , Spain ), specifically in the Plan of San Francisco, built at the beginning of the XVII century , in origin was municipal wheat, then barracks of caballerias in the Century XIX and Palace of Justice from 1886 , dedicating itself to exhibition hall and municipal archive after the restoration that lived at the end of Century XX. (wikipedia full page).

The text of this page has been traduced from the page of the “Consejalia de Cultura de Murcia”. 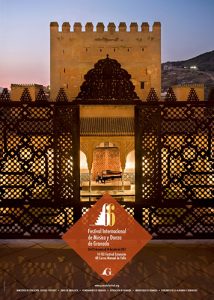 GRANADA  – the International Festival of Music and Dance  has its origins in 1883 during the celebrations of Corpus Christi and then again in the 19th century.
Another performance was presented as the “Cante Jondo Competition” organized in 1922.

This festival was organised  by García Lorca, Falla and other intellectuals and artists such as Andrés Segovia, Fernando de los Ríos, Zuloaga, Manuel Ángeles Ortiz, Turina and Rusiñol.

The Festival was organized in 1952 as the “First Spanish music and dance festival”.

Finally in 1953, the Festival was held as the International Festival of Music and Dance of Granada, name preserved to this day.

As susual le festival will be help in various sites such as:

Bonfires of San Juan in Alicante

The “Fogueres Sant Joan” (Bonfires of San Juan) is a festival that takes place every year from 19 to 29 June in Alicante, they have been declared of international tourist interest. 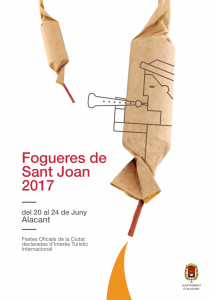 These are the biggest holidays of the city and have their origins in the ancient custom of burning objects, dancing around a bonfire, with the arrival of the summer solstice.

During the feasts, various acts are included as traditional “mascletàs” (loud and rhythmic pyrotechnics), the “plant”, the parade of Ninot, shows for the street parades, the offering of flowers to the Virgen del Remedio and the “cremation”. 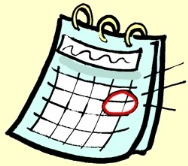 NEWSLETTERS Please find all publications of our newsletters, where you will find lot of informations about Home-Kare, what we are doing to improve our service to our customers and activities around END_OF_DOCUMENT_TOKEN_TO_BE_REPLACED 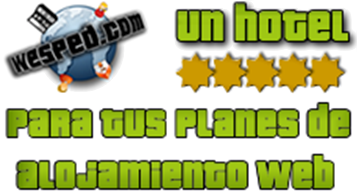